This violin was sold for a world record price at auction in June 2011.
Nippon Music Foundation donated all proceeds to The Nippon Foundation’s Northeastern Japan Earthquake and Tsunami Relief Fund to support their relief efforts.

Once owned by Lady Anne Blunt, the granddaughter of the English poet Lord Byron, this violin bears her name. The “Lady Blunt” deserves to rank with the “Messiah” 1716 violin and the “Tuscan” 1690 tenor viola for its outstanding freshness of preservation, and it is highly acclaimed as the finest example of the Stradivarius instrument making. The bass-bar and fingerboard were replaced by Jean-Baptiste Vuillaume (1798-1875), the renowned luthier in Paris, but the original still remain with the instrument. It also bears the ornamented pegs and tailpiece made by Vuillaume. Nippon Music Foundation had kept and preserved “Lady Blunt” since 2008, but decided to put it on auction to support the relief efforts of the March 2011 Northeastern Japan Earthquake. Widely advertised through internet, the bidding price set the highest auction record as a musical instrument at 8,750,000 pounds (14,177,599 US dollars). Nippon Music Foundation donated all proceeds to The Nippon Foundation’s Northeastern Japan Earthquake and Tsunami Relief Fund. 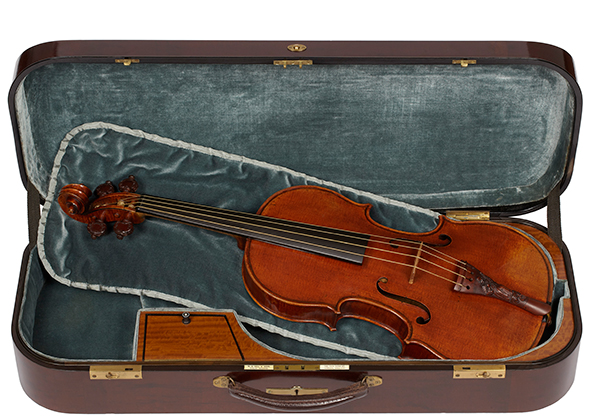